This year's event was held at the Chelmsford Society of Model Engineers track adjoining Central Park Chelmsford on 30th July. We were blessed once again with excellent weather and it seemed that the entire membership of the club was there bright and early to prepare the site and to see what the day would bring. Sadly, many of our northern regulars did not feel able for one reason or another to make the journey south, and our host's efforts to draw in support from local clubs also seemed to have fallen on stony ground. This was disappointing, given that members from as far away as Guildford, Bristol and even Tiverton have regularly attended northern venues for Lionsmeet, but there it is.

Having said that, we can honestly say that those who did trouble to make the trip enjoyed an excellent day out with a number of unexpected treats, often a feature of Lionsmeet gatherings. The highlight of the day was undoubtedly the exhibit table, the best seen for many years, and truly as feast for the eyes. We also saw David Neish's new dynamometer device in action for the first time, and Andy Haresnape's beautifully restored red 1965 Jaguar 'E' type, and the meal afterwards at the Horse and Groom was the usual convivial affair, with many things put to rights!. 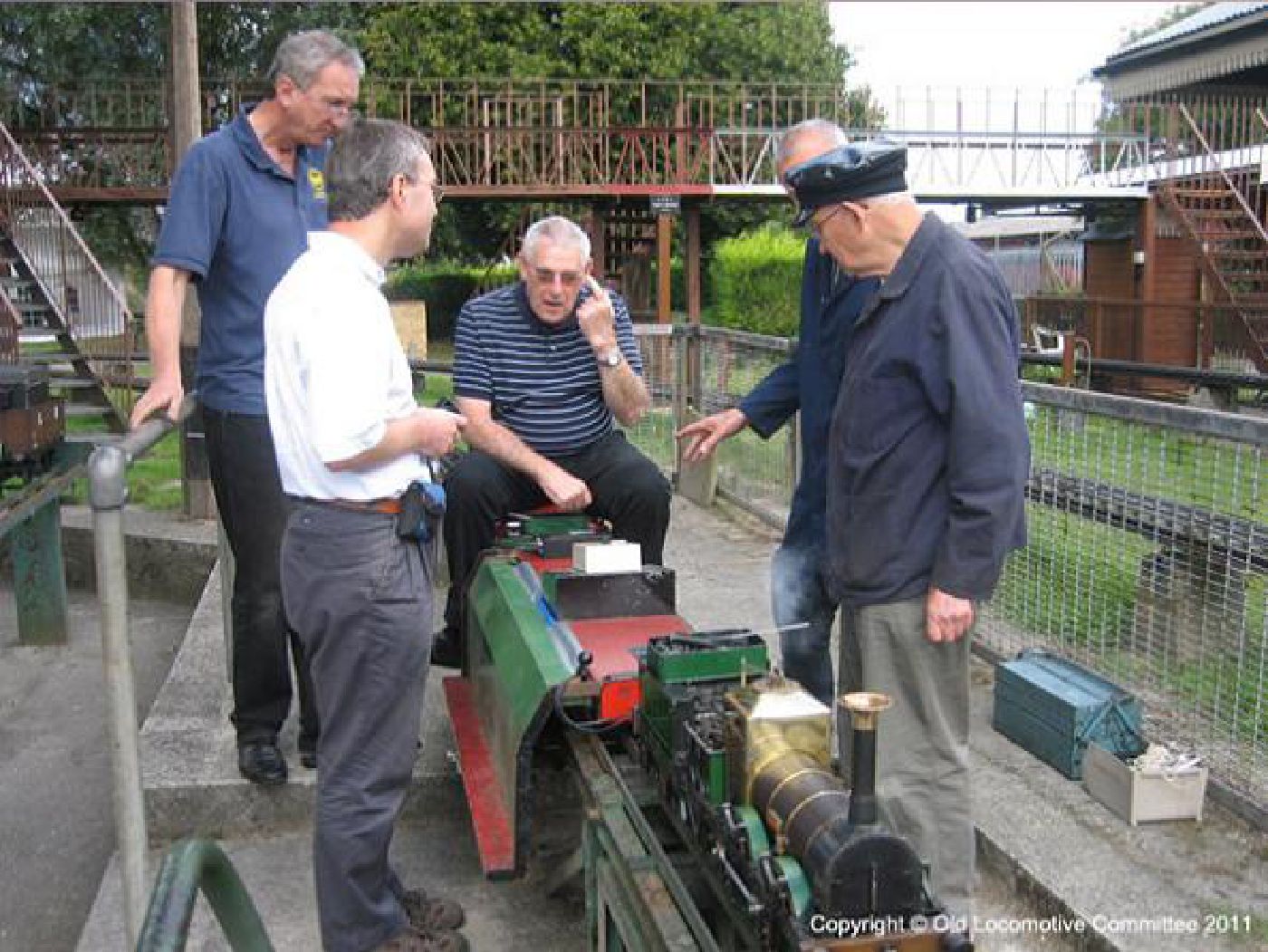 First job in the morning was to hook up a train incorporating David Neish's prototype dynamometer device in series with the host club's own dynamometer car, the intention being to compare the results from the two instruments. Seen here examining the setup are John Dalton of the host club, Andrew Neish, Philip Pritchard of the Newport club, and David Neish..

The picture captions tell the story of this year's event, but just to recap, Lionsmeet is a 'work done' competition, not an 'efficiency' competition. The morning is given over to practice, of which there was little this year except for checking out the dynamometers, and the competition proper starts at one o'clock. Each competitor makes up to two 'free' laps to assess the conditions and choose his load, following which there is a timed run of exactly ten minutes supervised by our onboard 'dynamometrix' Jan Ford with her stopwatch and results pad. Jan also ensures that the speed limit is observed, on this occasion 8 mph. At the end of the ten minutes Jan says 'Stop now!' and the driver stops immediately, wherever on the track he may be. The dynamometer display is read, and the train returns to the start point for the next run. At the end of the day the person with the most 'work done' in foot-pounds is the winner. It's as simple as that!

David's device, named LionsPower, comprises an 'intelligent drawbar' incorporating a load sensing device, and a black box to do the sums and display the result. The device only records work done at present, but could be extended to include distance run, which at present is recorded independently on an electronic cyclometer. 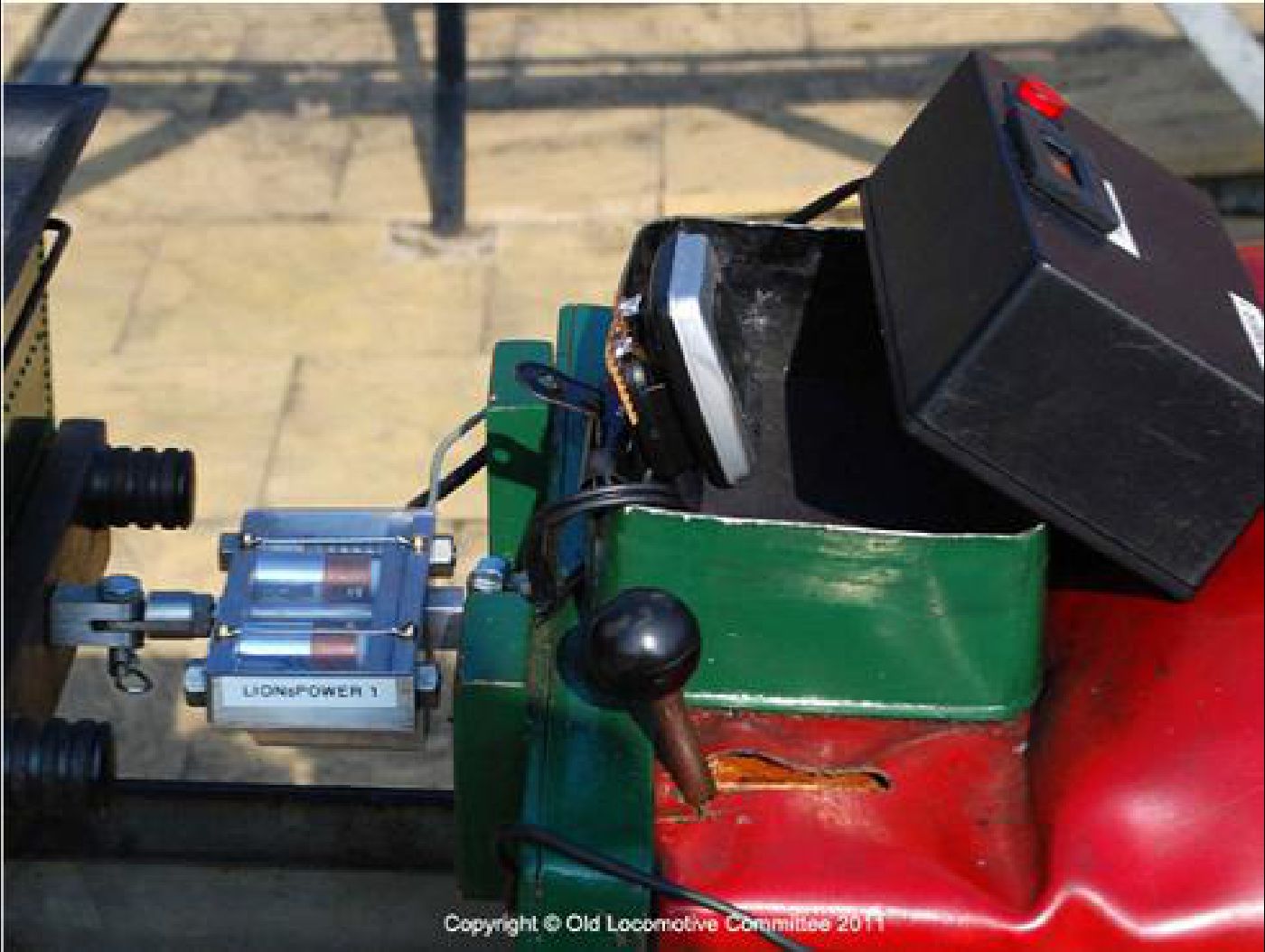 A short discourse on dynamometers may be of interest. They measure the work done by the locomotive in hauling the train, and often give additional information such as distance run, average speed and horsepower. OLCO has had to borrow a dynamometer car for each Lionsmeet and, while we are grateful for the loan, one or two have occasionally revealed some lack of TLC on the part of their owners, or difficulty with the particular modus operandii, as well as variations in the quality of calibration and therefore accuracy of results. OLCO has long felt the need for a dynamometer of its own, which would remove the latter two problems, and with appropriate design and care perhaps the first also. David Neish was the first to come up with a viable solution and we were able to test David's prototype at today's event by running it in series with the host club's own dynamometer designed some years ago by the club's chairman who, like David, is a professional electronics engineer. David's device is described below. It measures only work done, not distance run, though this facility could be added. The electronic cyclometer on David's driving truck was used in the morning trials for the distance run figures for comparison purposes.

With the exception of the first run, probably as a result of operating error, the results were consistent though not identical, revealing a reading 26% higher on the Chelmsford dynamometer than on David's. It is anyone's guess which device is nearer the truth! The distance run figures given by the Chelmsford car and by David's cyclometer were the same, within the vagaries of experimental error. This is reassuring, suggesting that so far as the concept is concerned the only thing needing further work is the calibration of the drawbar pull measurement. Without the resources of an accredited laboratory, this is rather hard to do with any certainty, but model engineers are a resourceful lot and by making covert use of some device of known and calibrated accuracy, such as the scales in the local post office, one can get a fair level of confidence in the outcome! 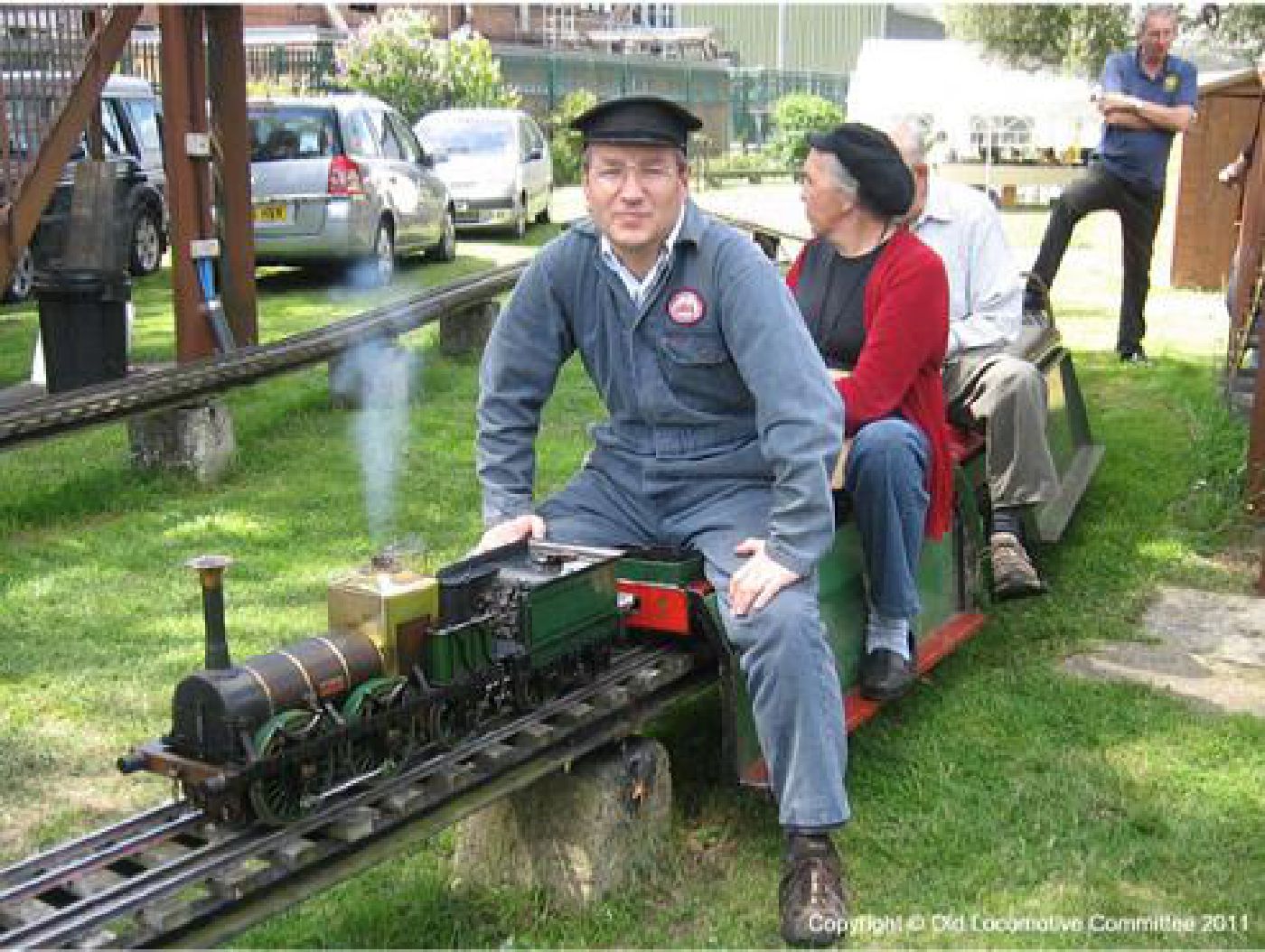 Andrew Neish, as last year's winner, is ready to roll for the first run of the day, just waiting for dynamometrix Jan Ford and father to sort out their dynamometer settings! Andrew had a good run, but with only two extra bodies on board he could probably have used a heavier load. The engine produced 51081 ft lbs of work according to the Chelmsford dyno car, 38627 according to the new device, so there is clearly some re-calibration to be done on one device or the other. A repectable result either way.

In the second run, David Neish also elected to take two passengers, including dynamometrix Jan, achieving a result slightly ahead of son Andrew's with 53943 ft lbs. 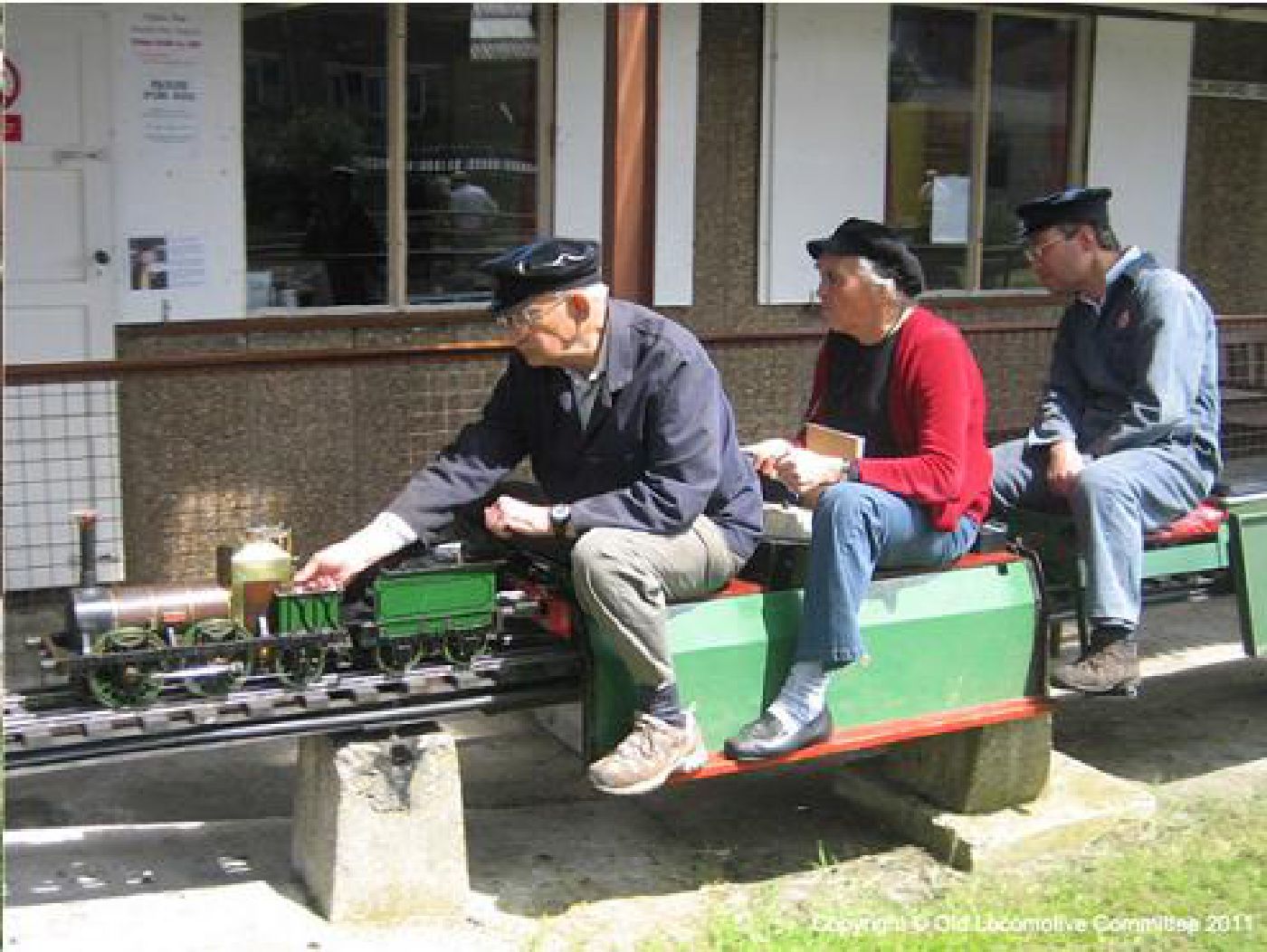 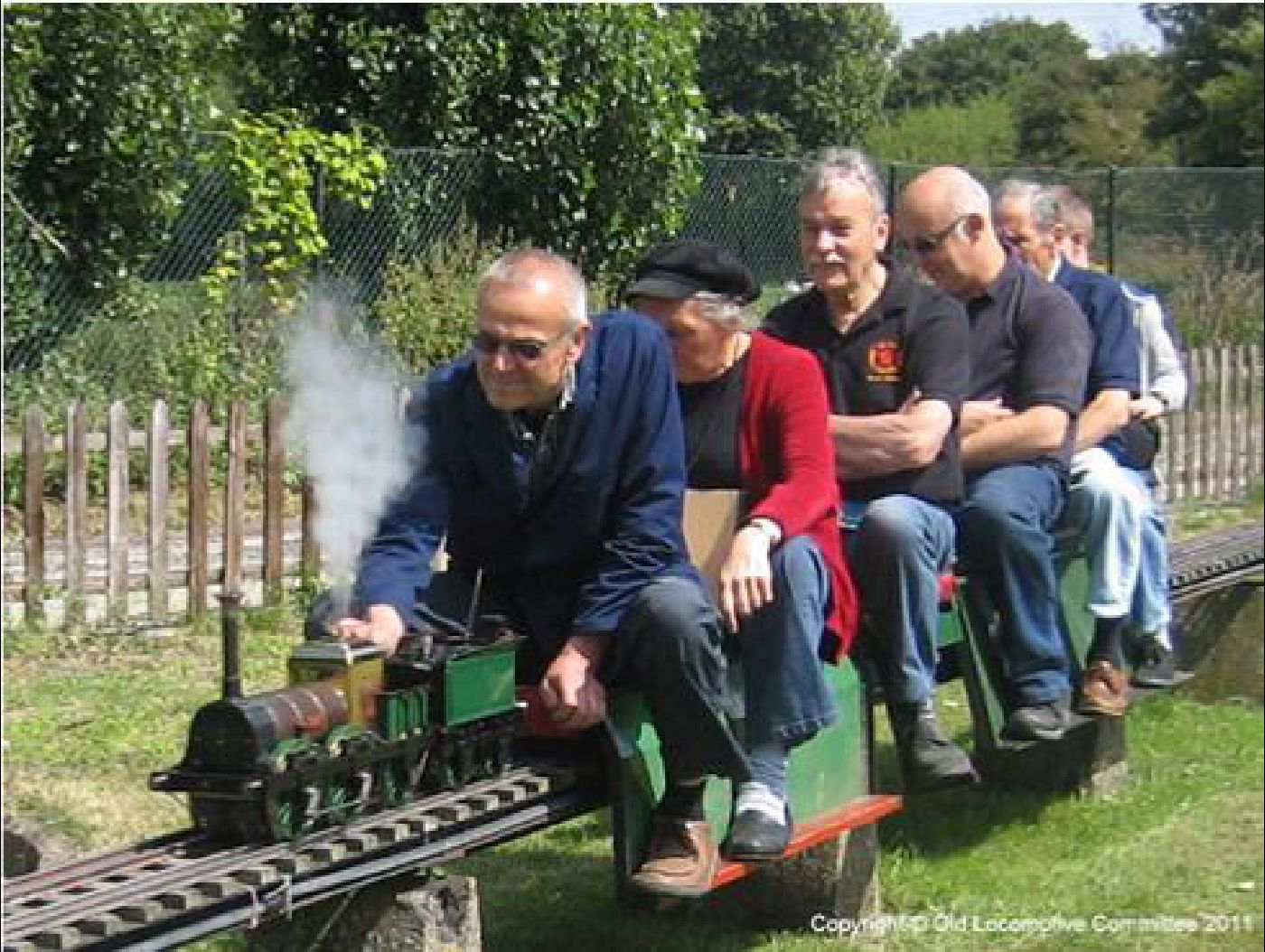 Jon Swindlehurst's assessment of the track conditions led him to take a much heavier load of five adults in total and a youngster of the host club. A brave choice, all things considered, but the engine kept its feet very well on the slightly slippery aluminium track to yield a fairly amazing result for the conditions of 74605 ft lbs on the Chelmsford dynamometer. We haven't checked, but would guess this is a personal record for Jon and his engine, always good performers in any event.

Adrian Banks raises steam for the final run of the day. Adrian has been burning the midnight oil to get his newly built engine ready in time for the event and inevitably there was a learning curve to be climbed on managing the engine as well as coping with the competition conditions. There are always teething troubles with a new locomotive, and the engine had to be retired from the event when a piston rod gland nut unaccountably unscrewed itself from its appointed position and jammed the motion. A valiant effort nevertheless, and we congratulate Adrian on his spiriit and hope to see him back next year. 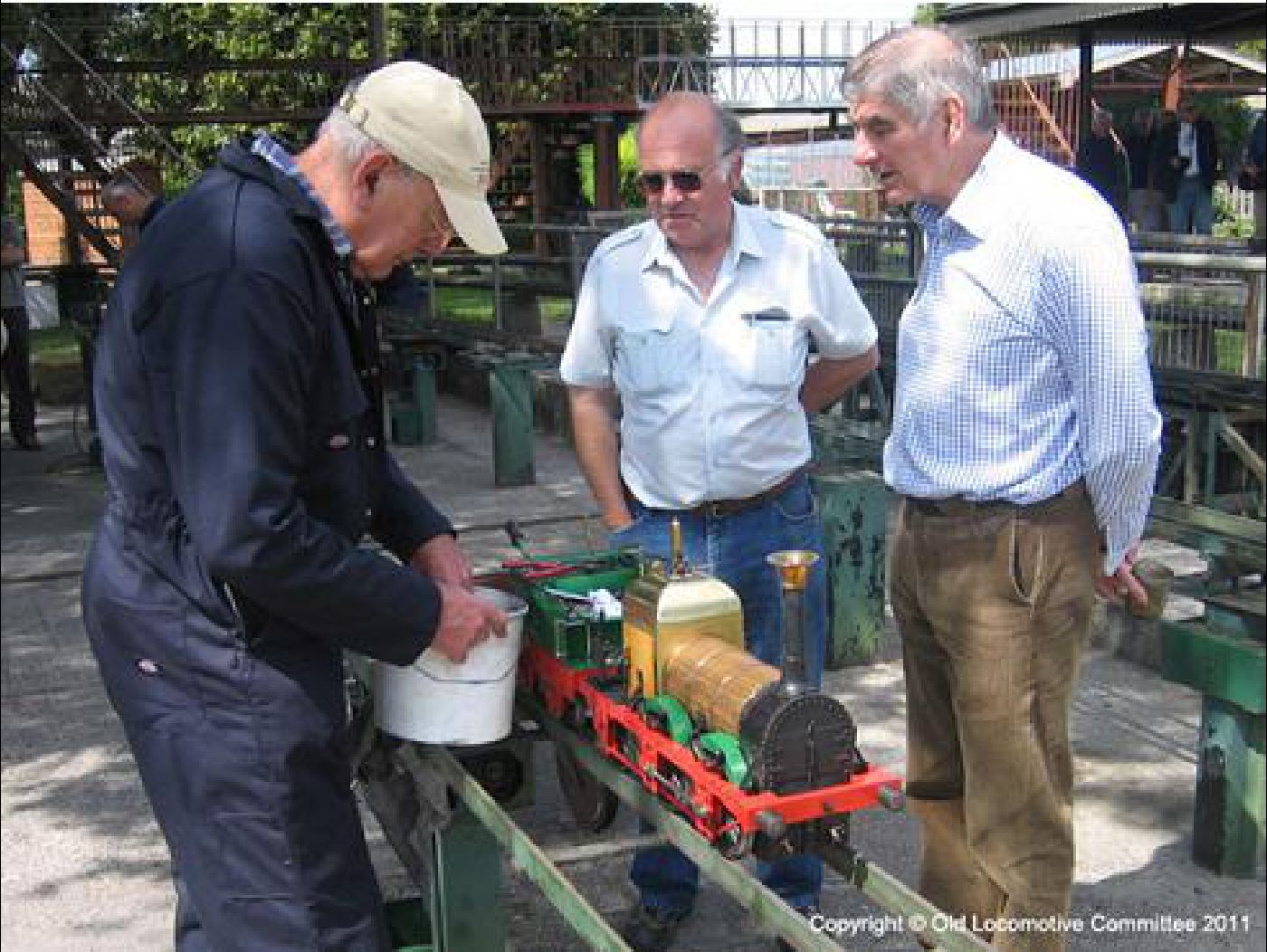 Next year's Lionsmeet will be held at Newport in south Wales, hopefully, on the 11th August, a couple of weeks later than our usual date of recent years. Our contact there, Philip Pritchard, is aready working out the details. There is another excellent club just down the road from Newport, at Cardiff, home of the first true scale 7¼" gauge Lion built to John Hawley's drawings, by Harrye Frowen. That has to be a pretty good reason for taking a short break in South Wales about the middle of next August! 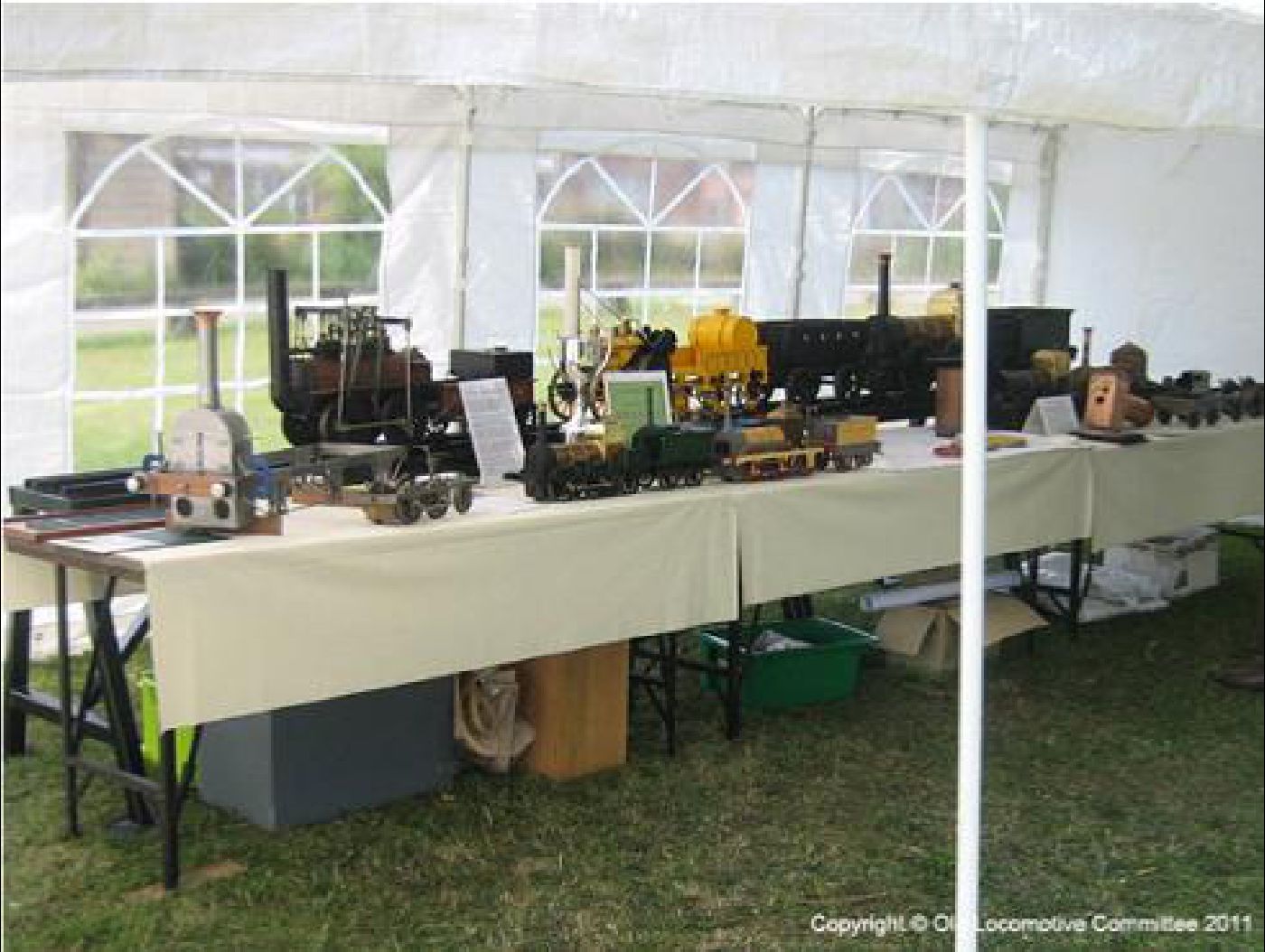 The excellent display of artifacts laid out in the exhibition tent, probably the best display we've seen at Lionsmeet in recent years. The display included no less than four 3½" gauge Lions, a couple in 5" gauge, two in 7¼" gauge (one unfinished), a rather nice 7¼" Rocket, a superb model of 'Locomotion' both by Chelmsford members, and many other interesting artifacts.

This magnificent model of 'Locomotion' was built by Don Ketley of the host club who unfortunately died in June this year. The loco is to the Reeves design but Don had difficulty keeping it in steam and was experimenting with different grates before he died. Don was a member of the Chelmsford club for nearly 60 years and was a prolific builder of models starting in 3½" gauge and finishing up with a number of 7¼" locos, including a 7¼" BR Standard Class 4 tank engine that wom him a Gold medal and the J.N. Maskelyne Cup at the M.E. Exhibitionin 1999.. His 'Locomotion' was finished in about 2002. 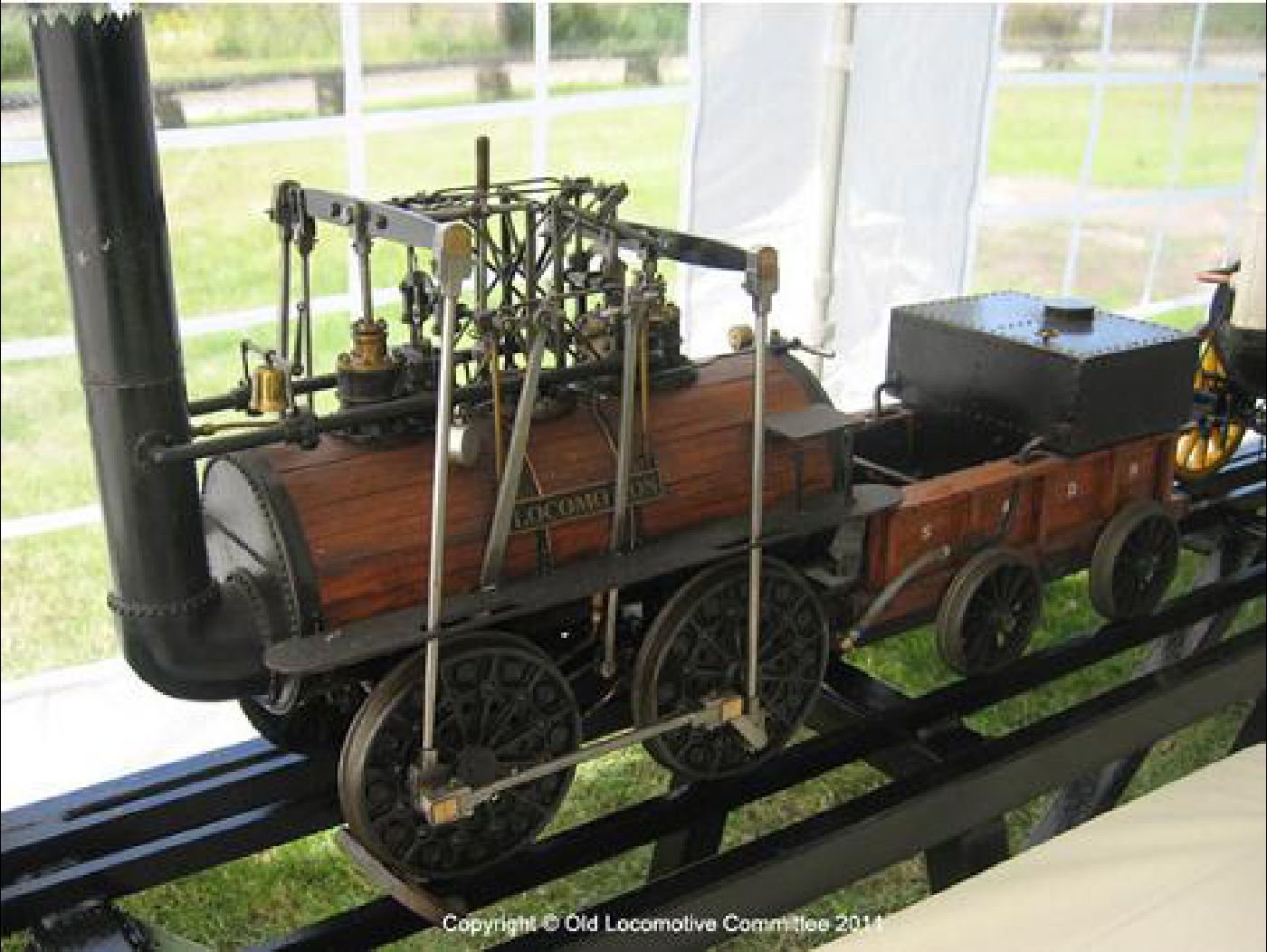 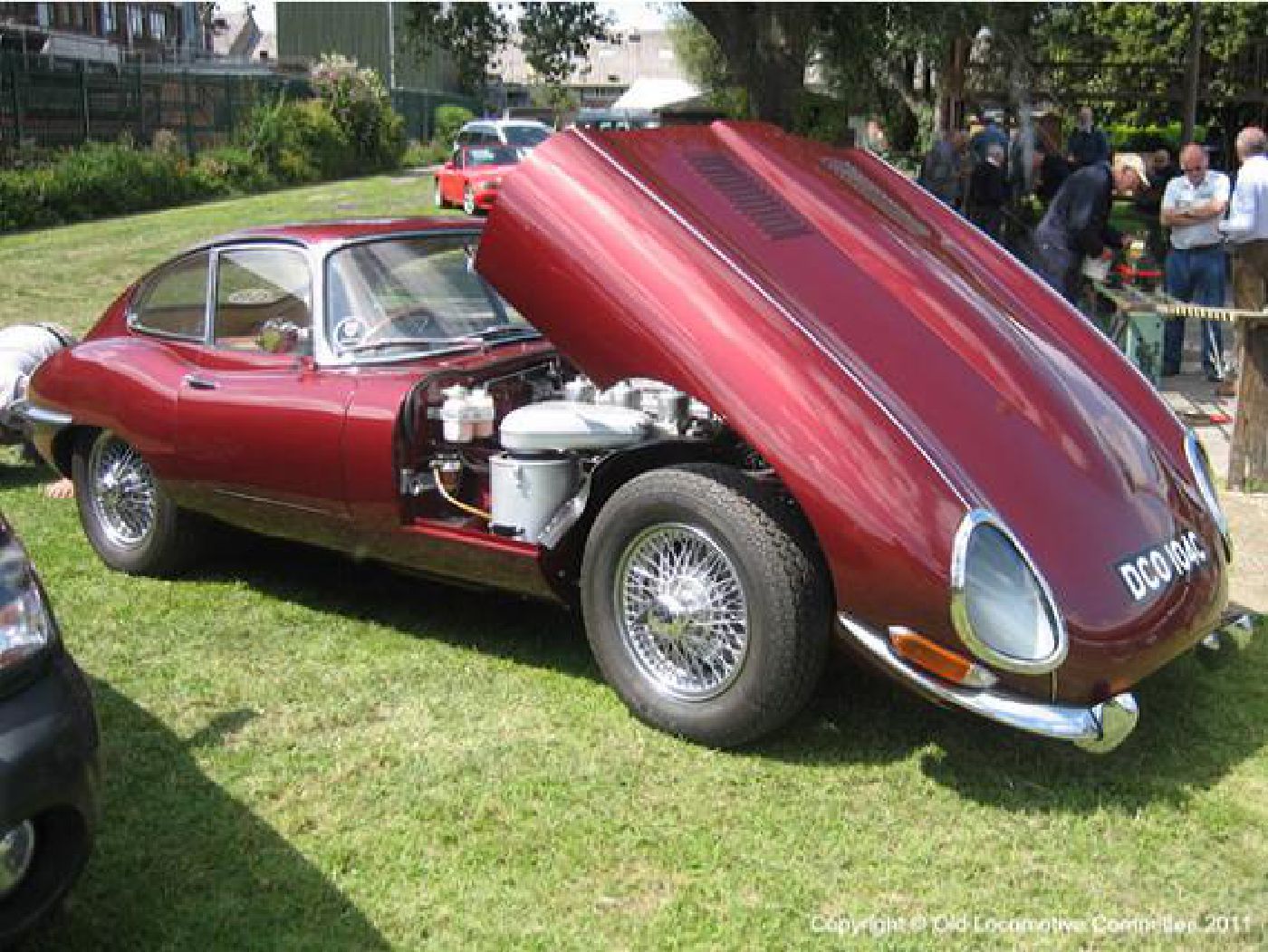 Andy Haresnape's beautifully restored 1965 Jaguar 'E' type fixed head coupe with the 4.2 litre engine. Andy did all the restoration work himself and the results were much admired by those attending. Thank you Andy, for bringing it along!