Reproduced below are the text and pictures for an article first published in Model Engineer 6th January 2006. References to time and place should be read in that context.

The bad news and the good

It was very much a mixture of bad news and good news for the Old Locomotive Committee this last year. Early in the year a deputation travelled from far and wide to Liverpool to discuss the future of Lion with the trustees of the National Museums on Merseyside, who own the engine. Despite making an excellent case for restoring Lion to steam, they were told that the trustees had decided that Lion would never be steamed again and would remain forever a static museum exhibit, and that this decision was not negotiable. A bitter blow indeed for the many who had cherished the dream of seeing the old engine in steam once again. 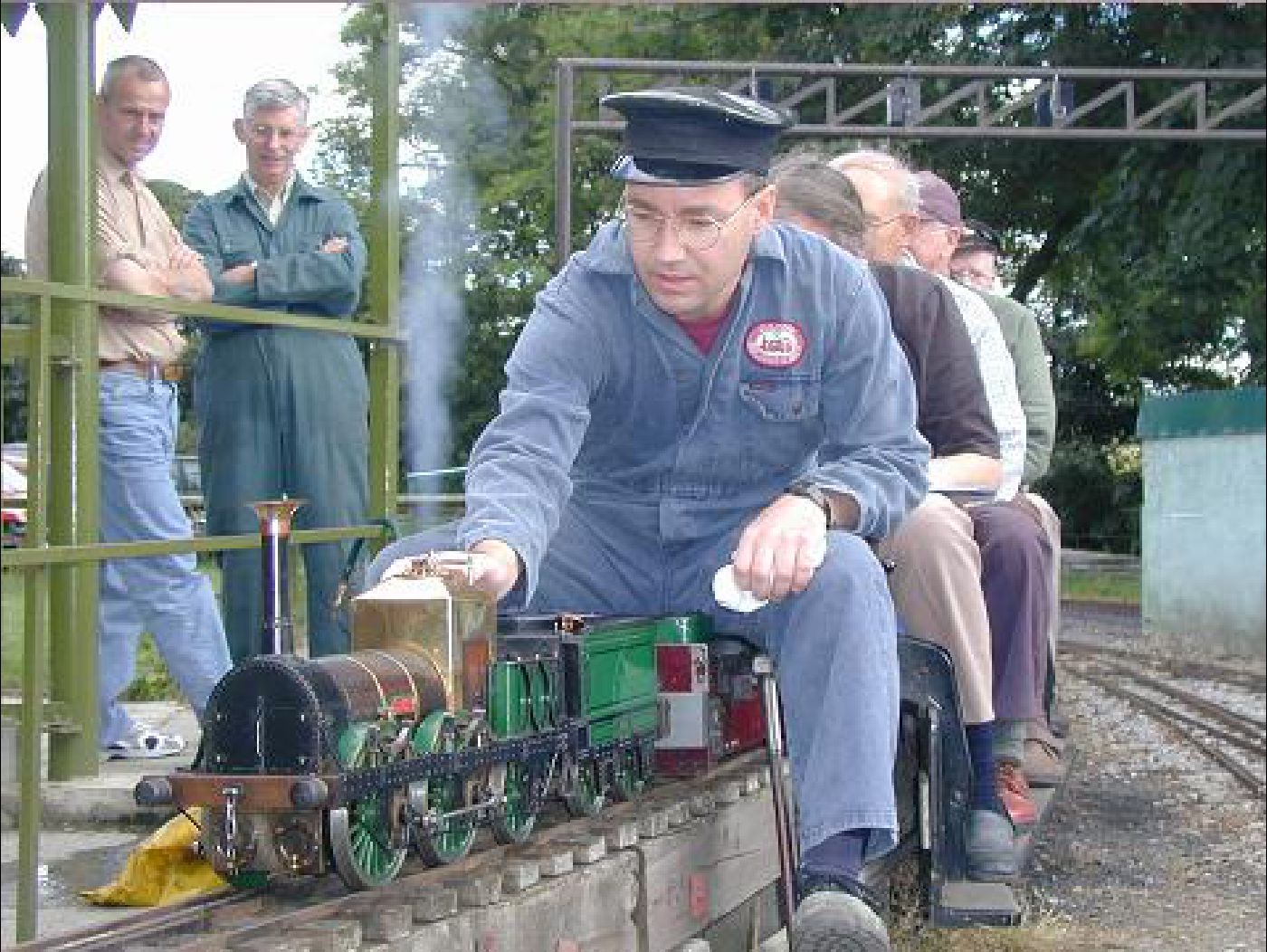 Last year's winner Andrew Neish was first to run, in accordance with Lionsmeet convention, and is seen here ready to leave the starting line with a total load of five adults. He finished in third place this year.

On the brighter side, 2005 saw the biggest and best Lionsmeet ever held since the inaugural event at Guildford in 1985, a fitting reward on its 21st birthday for all the work that has gone into promoting the event in recent years. Never a big event, most years have seen no more than four or five engines entered in the competition, and maybe one or two more on static display. This year we had eight competitors with seven engines, two more who could have competed but elected not to, with five more Lions and a very fine part built Rocket on static display. In all, eight 5" Lions, a Tiger, four 3½" Lions, a Gauge 1 Lion, and a Rocket. Tiger is of course a Lion with a different nameplate. By way of comparison, The inaugural Lionsmeet saw seven 5" runners, and the 1997 event at Peterborough saw eight in various gauges.

Lion had a sister engine, Tiger, and Martyn Reeve chose to name his model after the latter. A reminder of a largely forgotten piece of history. 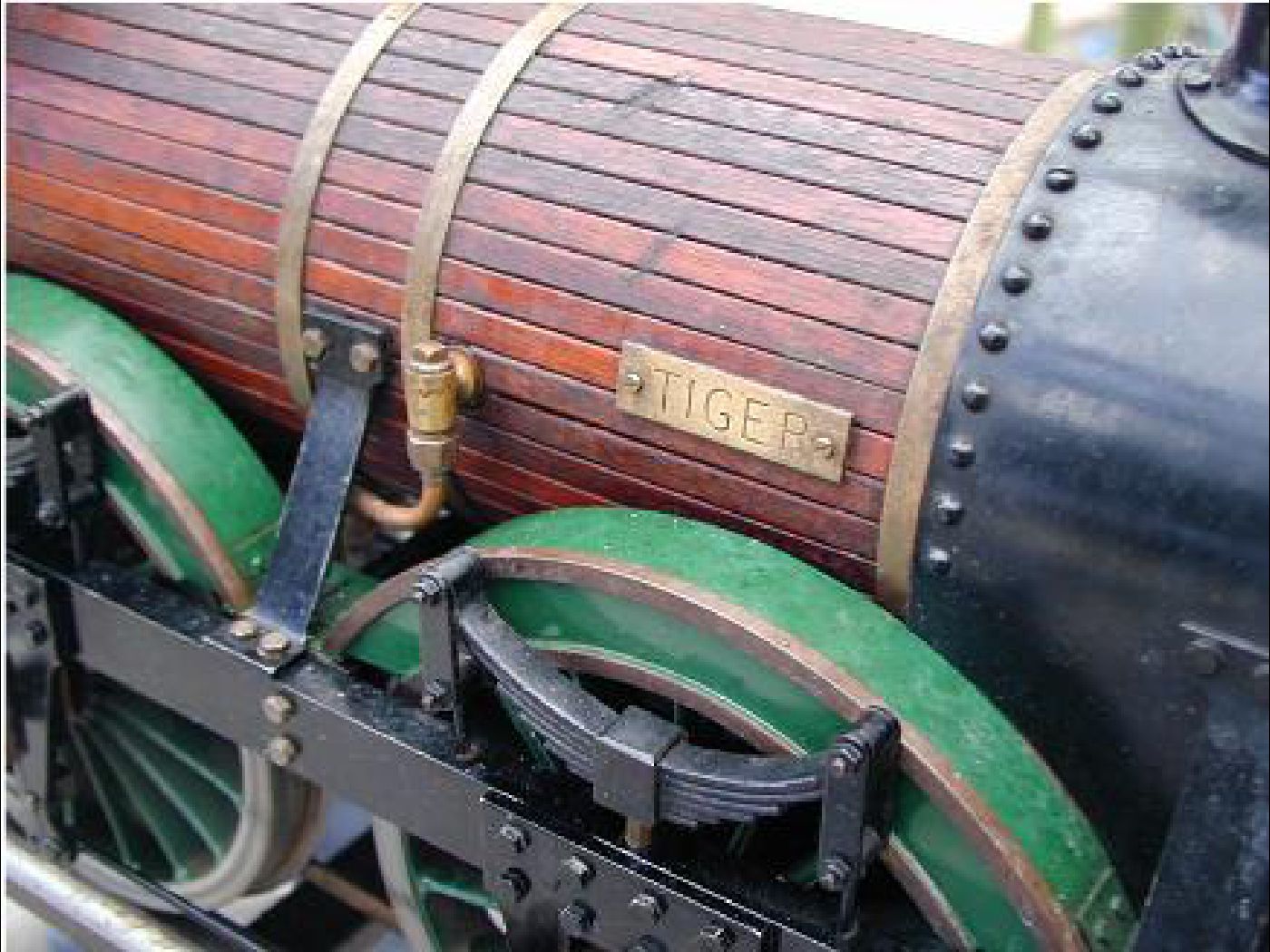 This year's record-breaking event was held at the Ravensprings Park site of the Brighouse and Halifax Model Engineers in glorious weather on Sunday the 7th August. Club members were there bright and early to prepare the site and make sure everything was in order, and the competitors started arriving at ten o'clock for the morning practice session. It very soon became clear that the turnout was going to be good, and it wasn't long before the log-jam on the track prompted the thought that we may need to assign slots even for the practice runs in future years. The ladies had been busy making sandwiches during the morning and these were quickly disposed of as everyone downed tools for lunch at 12.30. More practice runs, then the track was cleared for the competition proper at

2.00pm. The drivers were briefed on the essentials of the competition and lots were drawn to determine the running order, the first to run, by convention, being last year's winner.

The aim of the competition is to find the locomotive capable of performing the greatest amount of work done during a run lasting ten minutes exactly in each of the competing gauges. A dynamometer car interposed between the locomotive and the train measures the work done. The competition is open to Lion locomotives in 3½", 5" and 7¼" gauges, and prizes are awarded in each of these three classes. Sadly, 7¼" gauge engines have only featured in two of the 21 competitions to date and there were none this year. Reasonable modifications to the published design are permitted, but the addition of ballast external to the profile of the engine is not. Normally, drivers are free to select the load of their choice in terms of the number of trucks and number and distribution of passengers.

Each run starts at the same designated point on the track and finishes precisely ten minutes later, regardless of where on the track the train is. At the start and end of each run the dynamometer car meter readings are recorded and witnessed, and the distance travelled and work done are calculated. No account is taken of the amount of water or coal used. The aim is simply to achieve the highest rate of work output, regardless of efficiency.

At the conclusion of the competition the work done and distance travelled by each locomotive are calculated again from the relevant meter readings, checked with the earlier figures, and the results published. The driver of the locomotive producing the most work done in each gauge is declared the winner in his class, and a senior member of the Old Locomotive Committee then presents the prizes: the 7¼" Gauge Cup, and the Mike Parrott Memorial Cup for 5" gauge. Mike Parrott was the much-respected Guildford club member who co-founded the event back in 1985. As well as helping to get the event established, he won the 5" gauge class on a record six occasions. Sadly he is no longer with us.

There is no trophy for the 3½" gauge class, but it is customary for the chairman to make a presentation of wine. The cups may be held by the winners till the following year, provided they are members of OLCO. The wine may be disposed of at the recipient's discretion. It has been the practice in recent years for those involved to meet for a meal at a local hostelry before setting out on the journey home, and this year the jollifications took place at the Wyke Lion Hotel near Wyke on the Bradford road. Not well attended but enjoyable nonetheless, and we're working on the attendance for next year's event.

Rather than give a blow by blow account of each run in the manner of IMLEC, we will constrain ourselves to a mention of some of the highlights. We should then have room for a brief review of the first 21 years of Lionsmeet since its inception in 1985, within the space allowed by the editor.

It has been the convention at Lionsmeet that last years' winner will be the first to run. This effectively imposes a slight handicap, since the more observant of the later runners can learn much from the performance of the earlier runners. There has sometimes also been a tendency for a more relaxed interpretation of speed limits where they have applied, as the competition progresses and confidence in the track builds up. It was interesting to see a new dynamometer car at IMLEC this year which not only sounded a buzzer automatically when the pre-set speed limit was exceeded, but counted the number of infringements too! Three strikes and you're out, without any 'ifs' or 'buts'!

Last year's winner was Andrew Neish, who would have been knee high to a grasshopper when father David Neish was getting the event off the ground in 1985. Andrew has won the competition twice before, at Bromsgrove in 2002 and last year at Northampton. Our picture shows him about to leave the starting line. The engine was built by David many years ago and carried him to victory at the inaugural event at Guildford in 1985. Both the engine and the two drivers have proved themselves over the years to be strong contenders. Andrew's 'work done' figure has improved every year he has entered, but it fell short of what was needed this year to beat a relative newcomer to the event, and a seasoned old-timer.

Winner John Mills entered the competition for the first time last year with his newly finished Harrogate prize-winning model. On that occasion it was rather gracelessly adorned by a 'saddle tank' of solid lead. Since then he has raised the performance of the engine to match its appearance (by means we will not go into!) and increased its work capability from 19000 ft-lbs last year to a winning 59800 this year. Another fast learner! John has certainly done his homework to have come so far so fast, even to the extent of visiting the host club the Wednesday before the event to sus out the track! Needless to say the lump of lead is gone (we banned it from last year anyway!). John's result is ringed on the scatter graph, and can be seen to be well up amongst the previous winners; in fact the fifth best ever result.

Seasoned old-timer Jon Swindlehurst fell into second place, having won the event on two previous occasions. At 55400 ft-lbs his 'work done' was only a few hundred behind John Mills' and a failing boiler feed pump may well have cost him a third victory, although his previous best figure of 58605 ft-lbs at Leyland in 2001 was still fractionally short of this year's winning performance. These two will be the people to watch in future events! 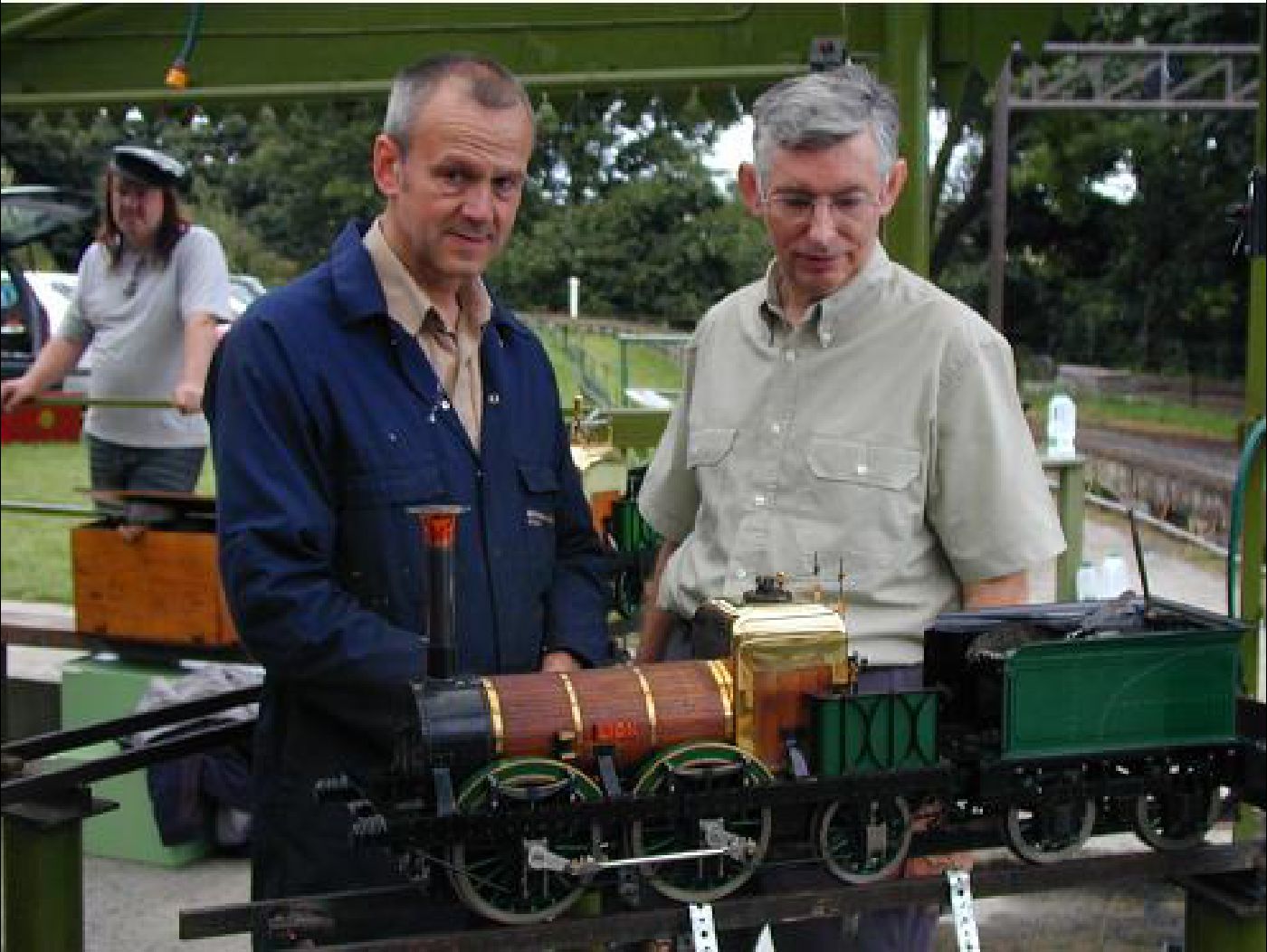 David Wainwright, Secretary of the host club had no shortage of cheerleaders to urge him on to finish in fourth place. A very creditable performance given that this was only his second appearance in Lionsmeet. 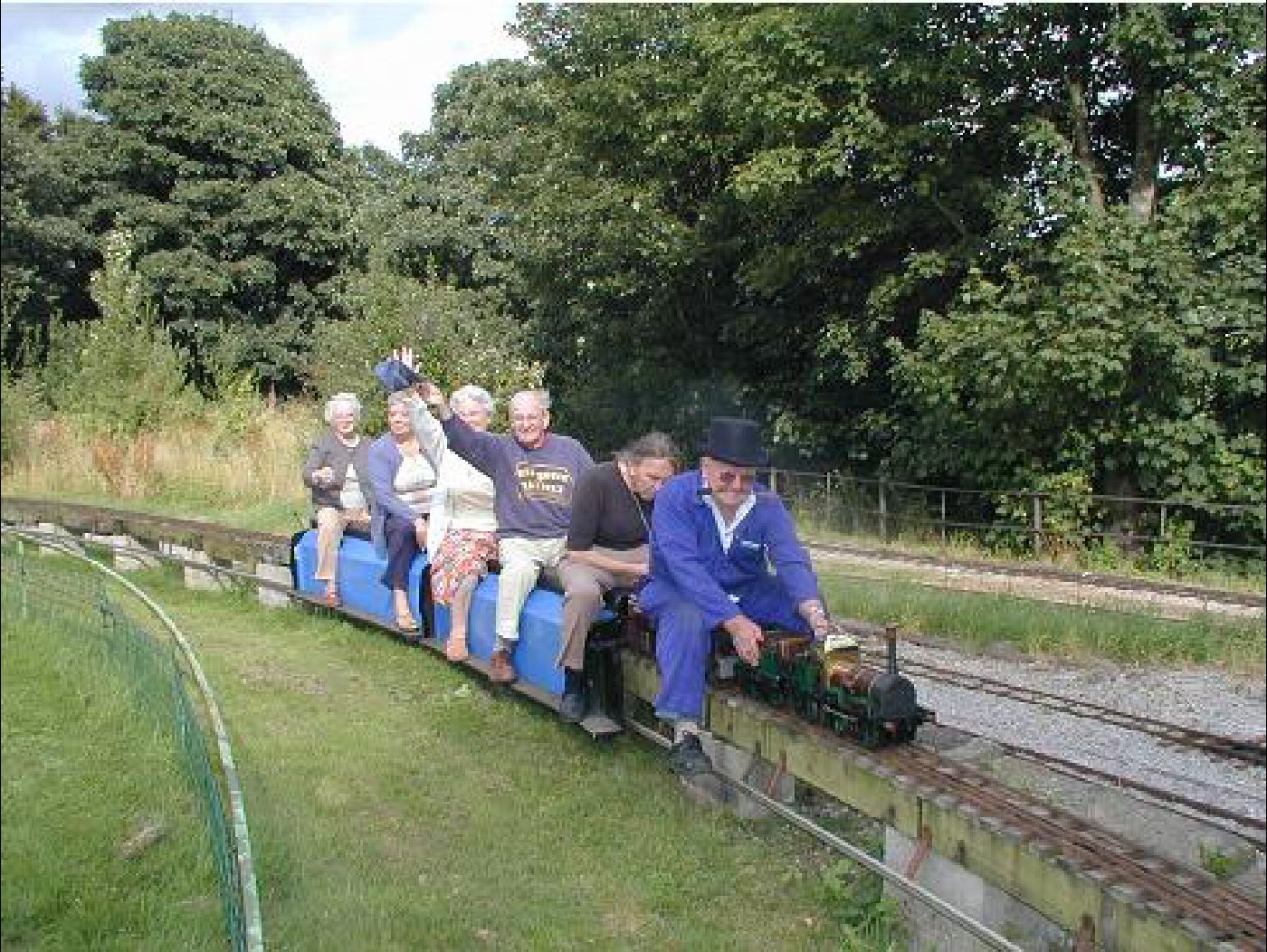 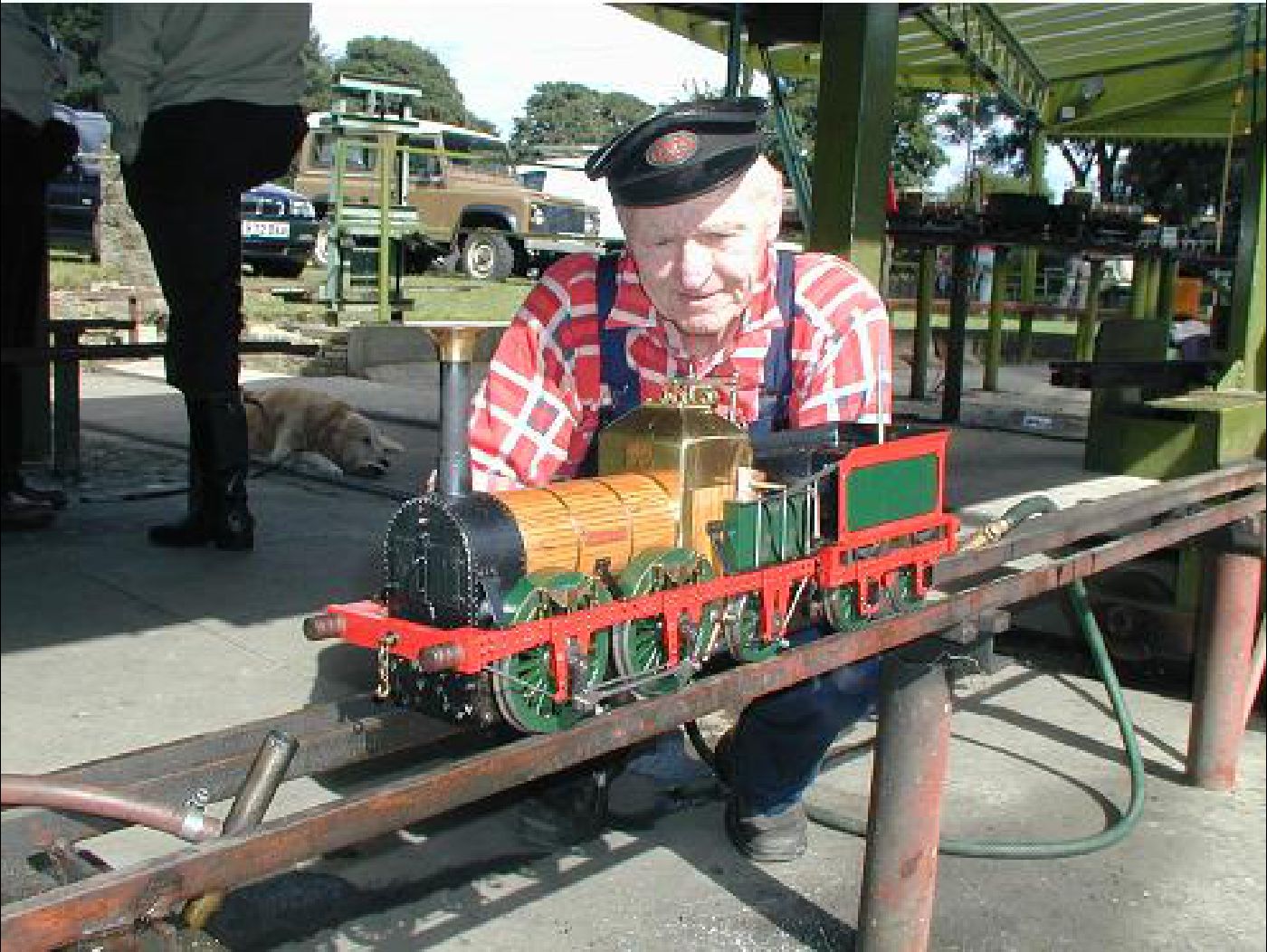 Geoff Cocking's Thunderbolt was the only 3½" gauge model in the competition. The name explains the unusual colour scheme and serves as a reminder that Curly Lawrence originally published the model design as Titfield Thunderbolt back in 1954 or thereabouts, having seen the film of that name featuring Lion similarly desecrated for the occasion.

Geoff Cocking is a member of the host club and was the only competitor to enter a 3½" gauge engine. The picture above shows him preparing the engine for his first run which unfortunately died on the starting line as the last embers of the fire fell through the grate. Things go wrong very quickly on these tiny engines and they require a great deal of concentration to keep them alive. To the surprise of many, he did actually move five people on two passenger trucks in this first attempt, but not by far! He was given a second slot at the end of the day, chose a more sensible total load of two adults and two children on a single truck, and amazed everyone with a very spirited performance yielding a work done figure of 13920 ft-lbs. There have been times when 5" Lions have done worse than that.

John Mills accepts the Mike Parrot Memorial Trophy from OLCO Chairman John Hawley. John entered the competition for the first time at Northampton last year when he did rather less well with a very new engine. A remarkable performance, and clearly a man to watch! 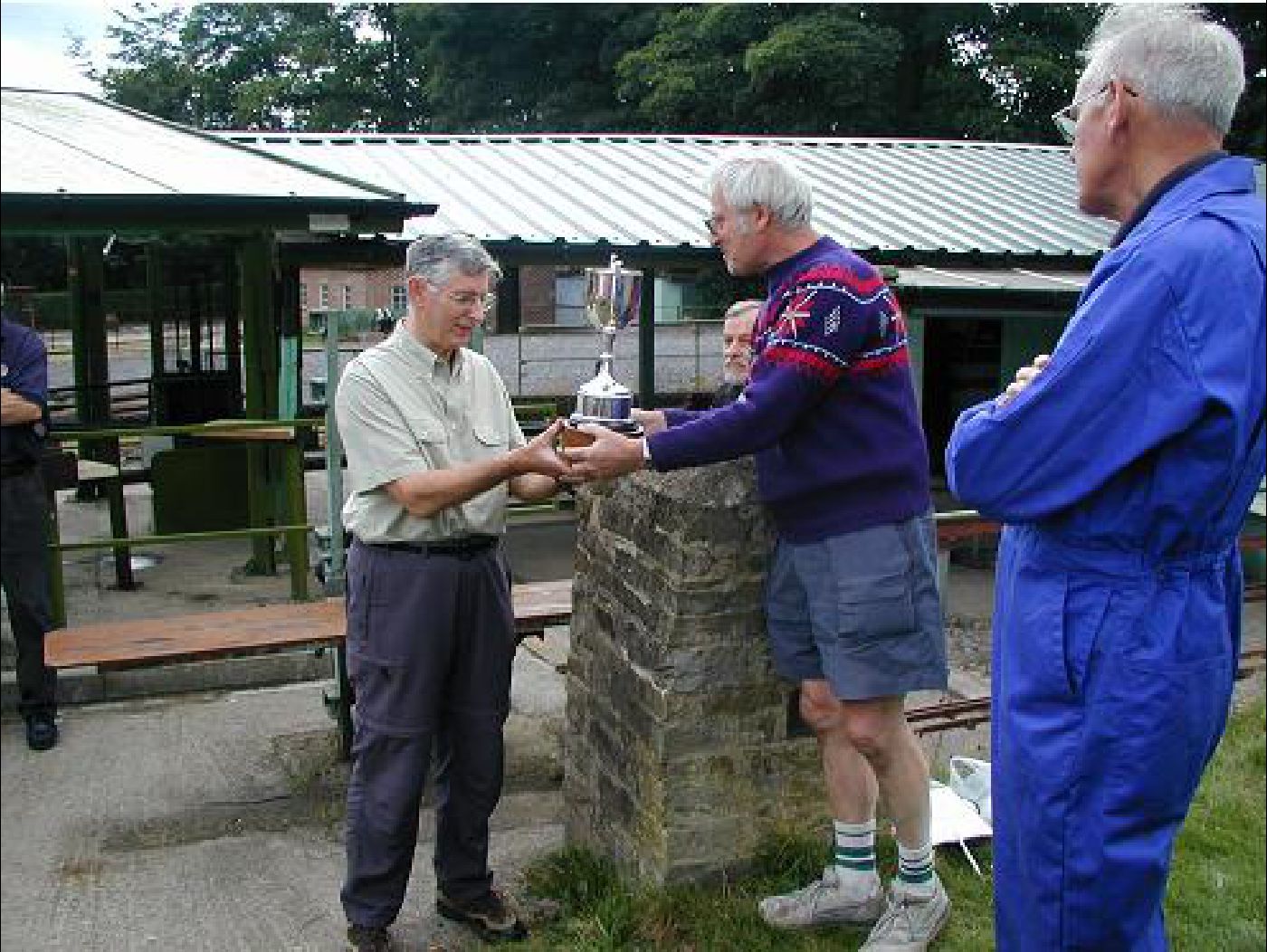 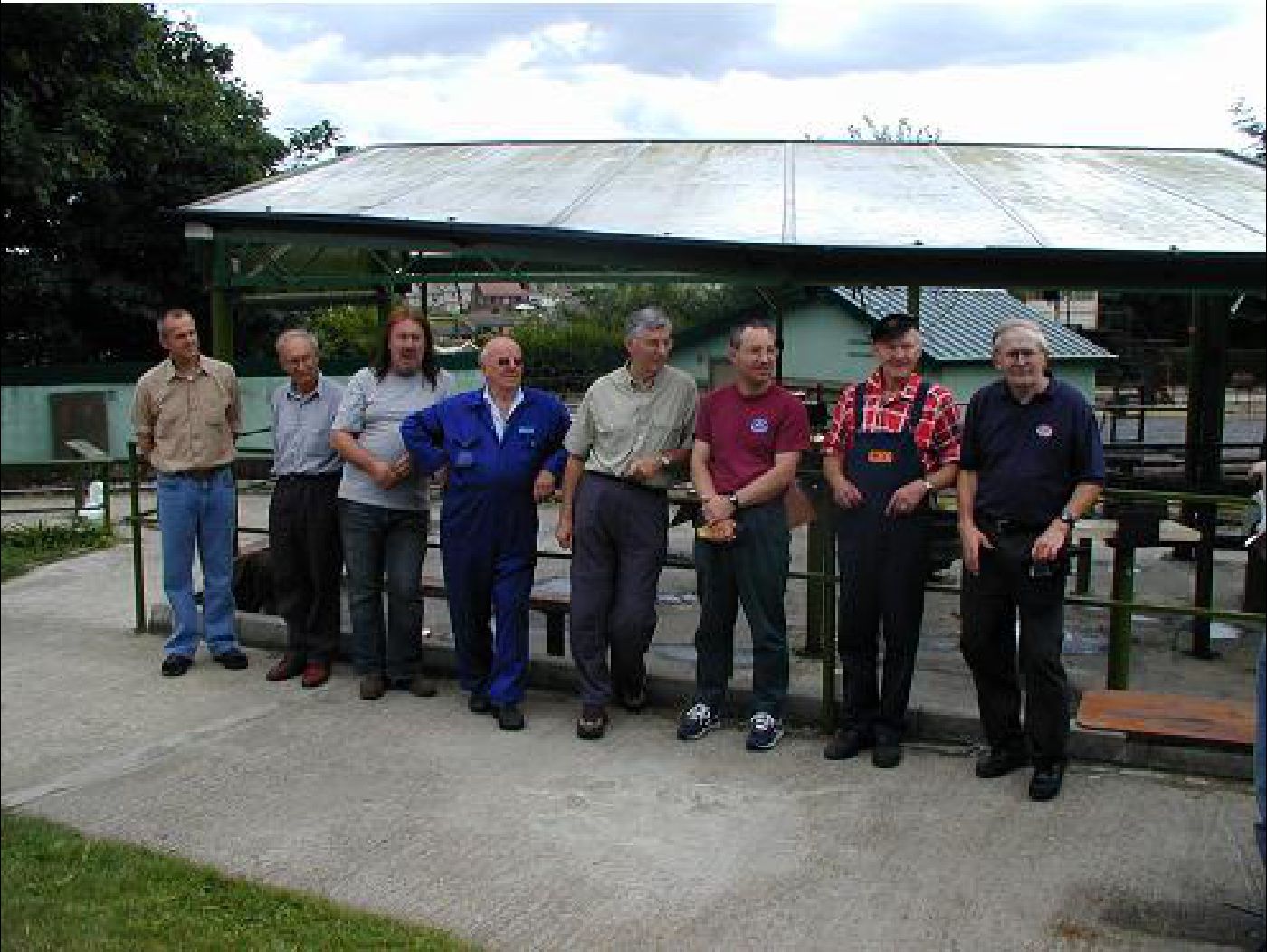