Reproduced below are the text and pictures for an article first published in Engineering in Miniature in February 2004 . References to time and place should be read in that context.

Back in 1927 a group of Liverpool engineers got together to support a celebration of the centenary of the Liverpool and Manchester Railway, in the wake of a similar bash planned by the Stockton and Darlington brigade. They called themselves the Old Locomotive Committee and they persuaded the Mersey Docks and Harbour Board to scrap what remained of Lion, originally built for the L&M but having spent most of her long life at that time pumping water out of Princes Dock. The Old Locomotive Committee then acquired the engine, raised funds and arranged after many false starts to get her restored as closely as possible to her original condition. This was done at the Crewe works of the LMS Railway Company.

The celebrations went well, the enterprising engineers later mostly went the way of mortal flesh, but Lion survived to be restored again more comprehensively for the Rocket 150 celebrations in 1980 and for her own 150th anniversary in 1988. This work was done at Ruston's Diesels Newton le Willows works, the site of the old Vulcan Foundry. In 1984, with the 150th anniversary celebrations in mind, a new Old Locomotive Committee was formed, most of whose members are happily still around and in good health. As well as promoting the restoration and preservation of the full size engine, now on display at the Manchester Museum of Science and Industry, the new OLCO also instituted an annual gathering of model Lions to be known as Lionsmeet. The first such gathering took place at Guildford in 1985, and has been held annually ever since. 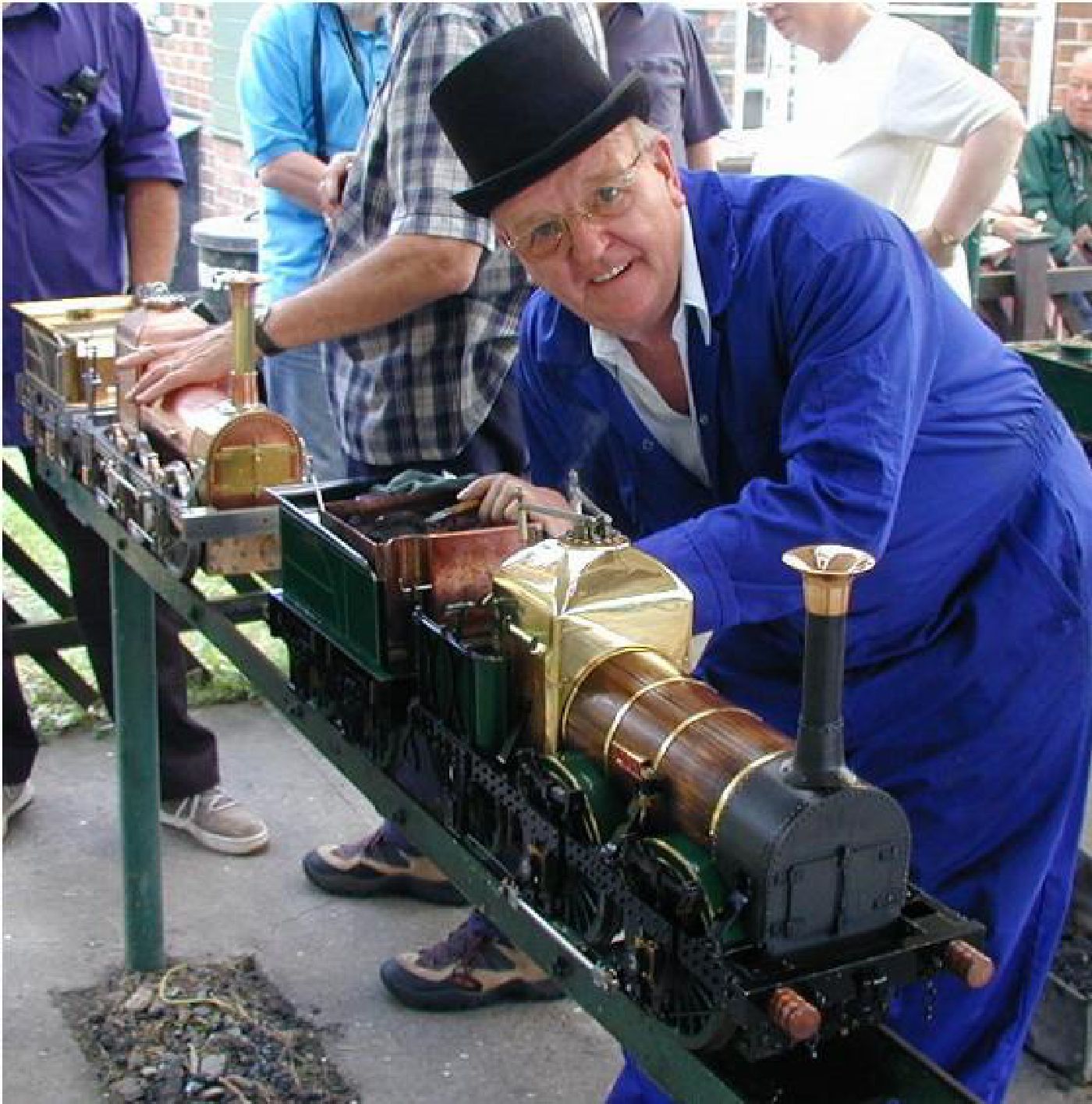 Lionsmeet is essentially an informal day out for Lion enthusiasts. To add a little excitement a competition is held to find the locomotive capable of performing the greatest amount of work done during a ten minute run, as measured by a suitable dynamometer car interposed between the locomotive and the train. There is a very fine silver trophy to be won, named in memory of Mike Parrott who was a member of the original team, for the best 5" gauge engine. There are prizes also for the best engines in other gauges, though it has to be said the other gauges are not well supported and only featured amongst the static displays this year. Drivers are allowed to get to know the track before their measured run, otherwise the rules are broadly along the lines of IMLEC, but since coal consumption is immaterial drivers are encouraged to have a good coal fire well before they start the run- there is no merit in stuffing the firebox with charcoal !

Lionsmeet was held this year at the Erewash Valley Model Engineering Society's track at Borrowash, near Derby on Saturday 16th August. The track is tucked away on a secluded site between a small housing estate and the A52 Nottingham to Derby road, and at a length of 550 feet with some interesting juxtapositions of gradients and curves proved to be ideal for the event. Attendance at Lionsmeet has never been good. The inaugural meet in 1985 attracted seven entries, and this years event only five, despite strenuous efforts to raise the profile of the event. It is hoped that a greater awareness of the event will perhaps improve attendance in future years.

The running order is determined on the day by mutual consent, but there is a tradition that last year's winner runs first and this honour fell to Andrew Neish from Guildford on this occasion. The engine must tow at least the dynamometer car carrying the driver, and a passenger truck which carries the official observer. In addition Andrew elected to attach a bolster wagon to carry water bottles, and an additional passenger truck. Altogether too much as it turned out, and Andrew dumped the passenger wagon during his trial laps (up to two are allowed) and did the timed run with just the dyno car, observer's car, and water wagon. This was very much a pioneering run during which everyone learned the idiosyncrasies of the track under competition conditions. Andrew recorded a figure of 34100 ft. lbs of work done.

Next to run was David Neish, also of Guildford. David set the standard at the inaugural meeting in 1985 with a figure of 72810 ft. lbs, a record that remained unbeaten for the next fifteen years. David opted for the same load Andrew had taken, but again it proved a little too much for the conditions and he came home with a figure of 30940 ft. lbs. Next was David Wainwright from the Brighouse and Halifax club with a recently finished very nice example of the Lion genus. Period dress is optional for Lionsmeet, even encouraged, but not often worn, so it was nice to see that David had gone to the trouble of obtaining a top hat of approximately the right period. He started of with the same load, but soon dropped off the water wagon and completed the course to achieve a figure of 15220 ft. lbs. A good effort but probably handicapped by the newness of the engine. It will perform considerably better next year when it will be fully run in.

Grim determination shows on Jon's face as he hurtles down the final straight to victory. 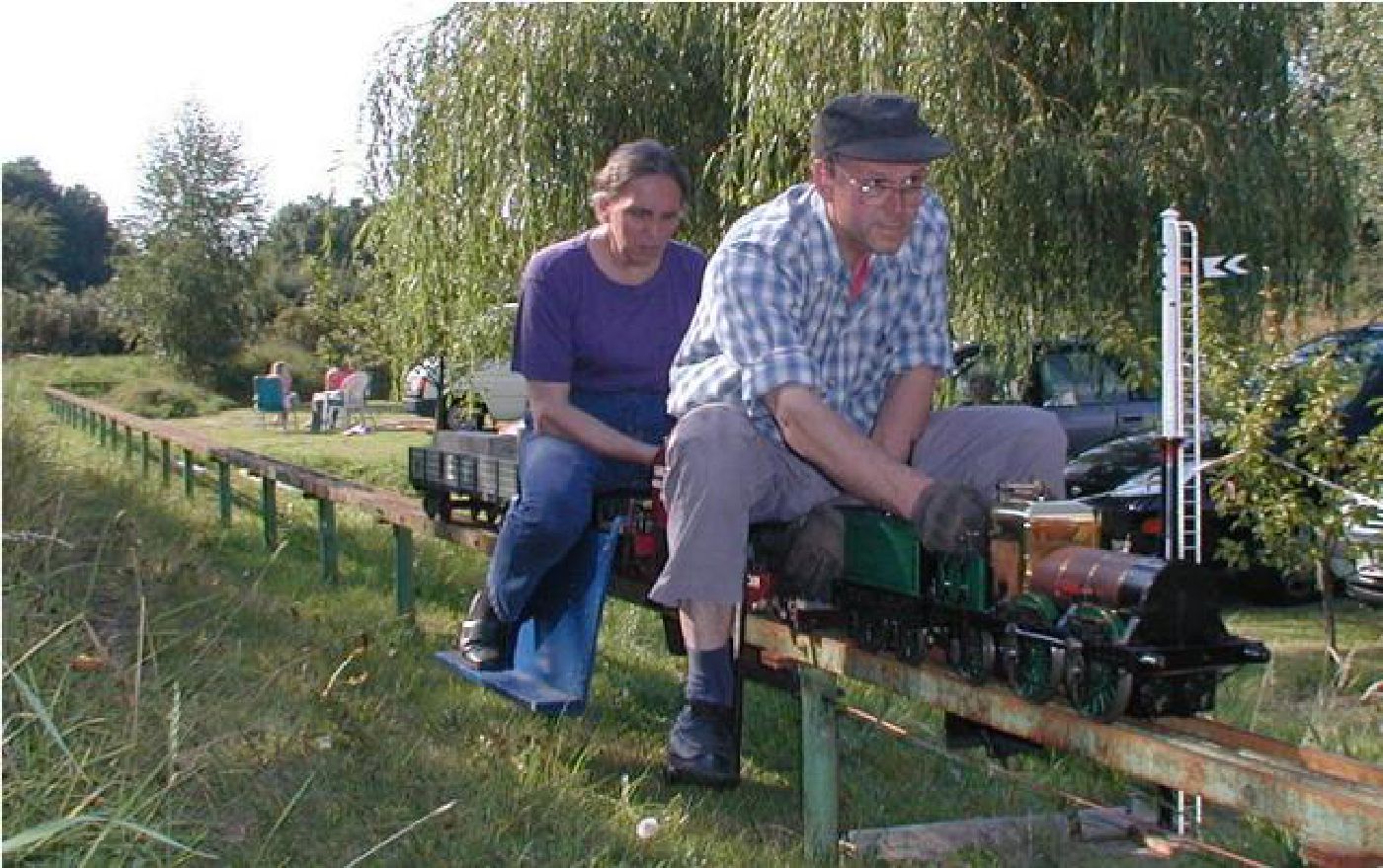 Alan Bibby ran next. Having had the benefit of studying form for the previous three runs he elected to re-attach the bolster wagon and put in a concrete lintel which happened to be lying nearby as well as a couple of bottles of water. This proved to be a good combination for his 13 year old engine which is rather well run in by now, rather running out in fact, and he managed to achieve a figure of 41350 ft. lbs. Finally Jon Swindlehurst, who had also been studying form, coupled up to the same outfit and raised the stakes for the day to 50490 ft. lbs in a storming run which carried him to the victor's podium by a large margin. The Mike Parrot Memorial Trophy was presented to Jon by John Hawley, chairman of the Old Locomotive Committee, after a few words of appreciation. 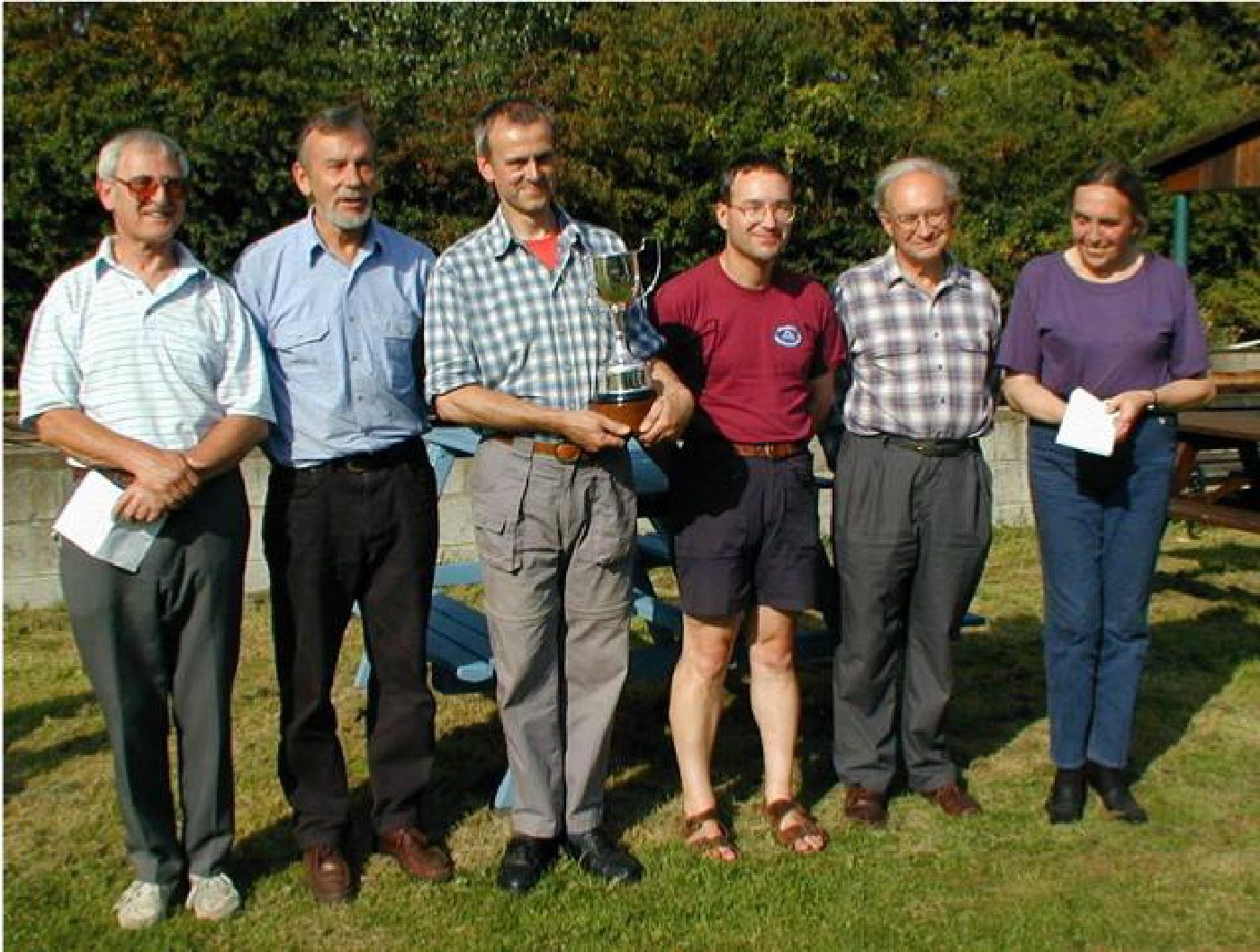 As with IMLEC, tactics play a part in the competition, but in a more open and lighthearted way, and so does luck. It can be helpful to go first on a nice rusty track, or it can be better to go later having studied how others have fared. But not if the heavens open half way through, as they did in 2001 wiping out the last three runs. And if, as last year, the host club decides that their newly extended track warrants a six mph speed limit and no additional trucks, that can put a different complexion on things. Especially if, as the day progresses, everyone realises what a superb running track it is and the speed limit is gradually, if somewhat informally, relaxed to the considerable benefit of the later runners. This year's wobbler concerned to what extent use of the brake amounted to artificially boosting the drawbar pull, and again successive contestants took an increasingly relaxed view.

All rather unprofessional, the IMLEC die-hards will mutter. Well, it isn't IMLEC. We don't get too wrought up about it, we just have a good time. Lionsmeet is a very convivial and enjoyable gathering of Lion enthusiasts, and in fact anything pre-1851 is welcomed too, and we commend it to you. We hope you will join us for the 2004 event, which will be held at the Delapre Park site of the Northampton Society of Model Engineers on 7th August.

We thank Erewash Valley Society of Model Engineers, their ladies, Guildford SME for the loan of the dynamometer car and David Neish for bringing it, and whoever organises the weather, for a jolly nice day out.

The host club even went to the trouble of modifying their station weathervane in honour of the occasion. 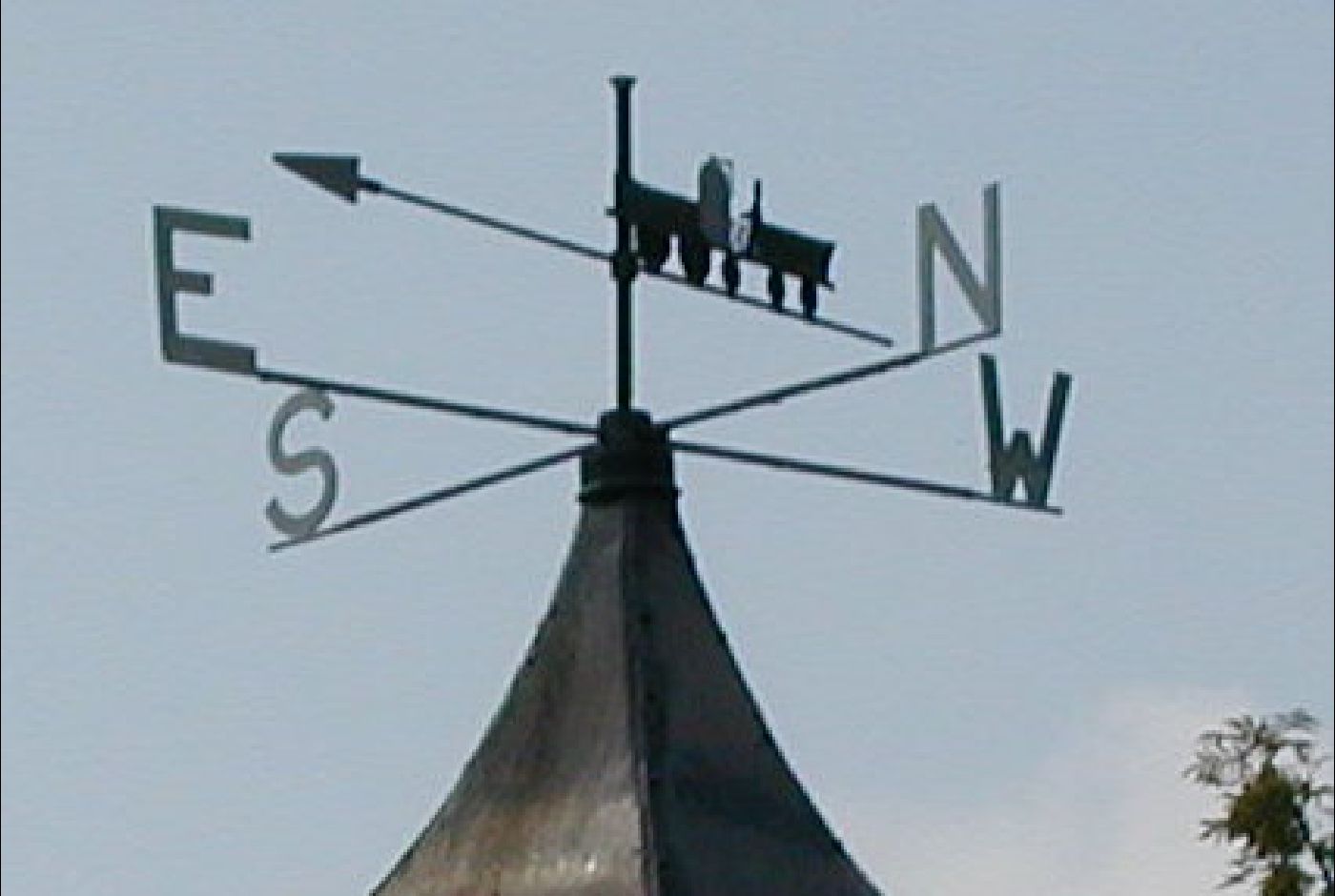